10Cr15CoMoV is a Chinese equivalent of Japanese VG10 steel. It is high in carbon and chromium, which gives it a high hardness and great resistance to corrosion.

The knife industry uses 10Cr15CoMoV stainless to produce thin, polished blades that are perfect for slicing.

The properties of 10Cr15CoMoV for kitchen knife material 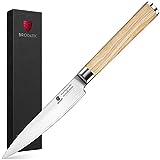 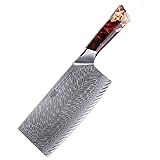 10Cr15CoMoV Steel has a hardness range of 59 to 62 HRC according to the Rockwell scale. The heat treatment that the manufacturer uses determines the final product’s hardness.

This steel’s high hardness is due to the high levels of Carbon in its alloy. Steel’s hardness determines its resistance to wear and how long it maintains a sharp edge.

The steel’s high hardness makes it very wear-resistant. Steel can withstand daily wear and the effects abrasion for a very long time.

Steel with good edge retention is desirable. 10Cr15CoMoV does have this property. Because of the fine mixture of Carbon, Vanadium and Cobalt, 10Cr15CoMoV is able to keep a sharp edge for a long time.

The 10Cr15CoMoV stainless-steel edge retention can also be compared with CPM HTML45VN , Elmax and HAP40 Steel. It is also slightly lower than M2 and CPM10V.

You don’t have to sharpen knives after each use if you are sick of using them.

Although they are often confused as one property, toughness and hardness represent two different aspects of steel. While hardness is the steel’s resistance to wear and abrasion and toughness the steel’s ability to withstand pressure and impact that could cause it to shatter,

Steel’s toughness decreases with increasing hardness. This rule would mean that 10Cr15CoMoV Steel would have very low toughness. It is however, contrary to the rule and offers good toughness.

You can therefore trust 10Cr15CoMoV knives in difficult applications, as they are not easily broken or chipped.

Many people are interested in corrosion resistance when purchasing knives. So, does 10Cr15CoMoV steel rust? It does not rust, as it has enough chromium that it can be made stainless steel.

Steel 10Cr15CoMoV has an excellent resistance to corrosion and rusting. It can be used in wet, humid, and salty environments. To prevent rust, steel needs to be properly maintained and cared for. It is as easy as washing and drying the blades after each use to take care of this steel.

Hardness determines how easy it is to sharpen steel. We expect 10Cr15CoMoV to be very difficult to sharpen due its high hardness. This is not true. This steel is hard due to its chemical composition, but sharpening it is not difficult.

It also doesn’t get duller. The 10Cr15CoMoV varieties will please budget-minded knife lovers who want a sharpener that lasts for years.

CPM S30V and 10Cr15CoMoV Steel have nearly the same hardness. However, their alloys differ greatly. HTML30V contains more Vanadium and carbon in its alloy. This allows for the formation of high levels of Vanadium Carbides. S30V steel has marginally better edge retention than 10Cr15CoMoV.

Because they contain high amounts of Chromium in their alloys, both 10Cr15CoMoV (SS30V) are stainless steel. Both will offer the same resistance to corrosion.

They offer excellent toughness but are not as tough as NitroV steel or 420HC Steel.

Sharpening 10Cr15CoMoV will be easier than sharpening S30V. This is due to the high wear resistance of S30V steel due to powder metallurgy.

S35VN is a premium steel for powder metallurgy. It is superior to 10Cr15CoMoV in edge retention, hardness and toughness. S35VN is most commonly used for pocket knives, while 10Cr15CoMoV is used for kitchen knives. 10Cr15CoMoV steel is easier to sharpen, but it won’t hold an edge for as long as S35VN.

D2 steel has better edge retain than 10Cr15CoMoV, and is therefore easier to sharpen. D2 steel is not as sharpenable as 10Cr15CoMoV, which has a high level of chromium carbides.

10Cr15CoMoV Stainless steel is the Chinese equivalent to japan-made Takefu Takefu VG10 stainless Steel. Both have the same chemical structure in their alloys. Amazon listings show that knife manufacturers often alternate between VG10 and 10Cr15CoMoV stainless steel within the same product listing.

VG10 steel or 10cr15comov equivalent. This information is not confirmed by the government. It is only based on product listings and Civivi, a knife manufacturer that has confirmed it.

Popular steel for knife making is Sandvik 14C28N. This Martensitic Stainless Chromium Steel is known for its excellent resistance to corrosion and toughness.

Its toughness level surpasses that of 10Cr15CoMoV Steel, making it one of the most tough knife steels.

7Cr17MoV steel, the Chinese equivalent to AISI 440A, performs like 440A. It is an upgraded alloy of 10Cr15CoMoV Steel with additional carbon and vanadium. This steel has edge retention and toughness that beats 7Cr17MoV steel.

Both 7Cr17MoV as well as 10Cr15CoMoV have the same corrosion resistance. Because of the lower wear resistance, it will be easier to achieve a sharp edge with 7Cr17MoV steel when sharpening.

10Cr15CoMoV has high corrosion resistance. It is also easy to sharpen and contains vanadium carbides which increase the wear resistance. Moreover, the price is very affordable because it’s made in China.

China-made products are generally considered to be low quality. However, 10Cr15CoMoV has all the characteristics that make knife steels great. It is a exact replica of Takefu’s VG10 steel.