Aichi Steel Company, located in Tokai in, Japan, produces AUS 10 steel. Also known as AUS-10A Steel. Although it wasn’t well-known in the past, it gained popularity when it was used in imported Japanese knives.

The AUS 10 steel can be used to make high-quality knives. It is affordable and has excellent edge retention, toughness.

AUS10 steel is the best steel type under the AUS series (AUS-6, AUS-8, and AUS-10) due to its high carbon- and vanadium contents. AUS-10 steel is also stainless steel because it has high levels of Chromium in the alloy. 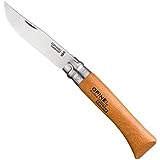 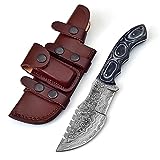 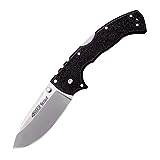 These are just a few of the characteristics that make AUS-10A steel stand out from its competitors:

AUS10 steel is hard due to its high carbon content. It scores between 58-60 HRC on Rockwell’s scale of hardness. However, the knife’s sharp edges make them fragile. To increase the material’s elasticity and ductility, the exact amount of manganese and silicon have been added to AUS-10 alloy.

Steel with a greater amount of fine carbides tends to be sharper than steel with fewer large carbides.

AUS-10 stainless-steel knives can be easily sharpened and achieve a perfect edge. Sharpening AUS-10A stainless steel knives is simple and can be done with different sharpening tools.

You should be cautious during this process. For example, avoid using a pull-through sharpener.

This steel is not the best, but it’s still good. Other steels such as LC200N and H1 steel offer greater corrosion resistance.

The unique steel alloy’s combination is what makes it so special. Wear resistance is high for AUS-10 steel thanks to Vanadium and Chromium as well as Molybdenum.

AUS 10 steel has more carbon and vanadium than any AUS steel series steel. This makes it the most hardy blade type in the AUS category.

AUS-10A is tough as it has a hardness of between 58 and 59 HRC. Nickel can also be added to greatly increase its toughness.

The knives are strong enough to withstand repeated sharpening.

Knives made from AUS10 steel will need to be sharpened more often due to their lower edge retention. However, knives made of VG-10 are more durable and can keep an edge perfect for a longer time.

AUS 10 and VG-10 are both stainless steels that have high Chromium contents. However, VG-10 steel has a better rust resistance.

AUS10 steel is more resistant to wear than AUS-8 Steel due to its higher carbon content. AUS-8 steel is slightly tougher because of the inclusion of more Nickel elements.

AUS-10 and AUS-8 are nearly identical and have excellent wear resistance thanks to their alloys.

AUS-6 can be more fragile and break faster than AUS-10, but it is less brittle. AUS-6 is more easy to resharpen than AUS-10 because it has a lower hardness rating.

AUS-10 is superior to AUS 6 in all properties. AUS 6 steel, the lowest end of the AUS series, is one of the most hated steels.

Yes! Yes! This steel is easy to sharpen, and many people consider it a top-quality metal.

It is closer to AISI 440C, and can be considered its Japanese counterpart. However, it has slightly better performance because of the addition Vanadium. AUS-10 steel is different from the well-known 154CM Steel because it has smaller grained carbides.

AUS10 steel knives are extremely durable and rust-resistant. AUS-10 steel is also more resistant to rust and corrosion than other carbon steels.