What is AUS6 steel?

AUS 6 steel is a part of the AUS series, which includes AUS 4, AUS 6, AUS 8, and AUS 10. Aichi Steel manufactures it in Japan. AUS 6 has 0.65% carbon in its composition. This makes it a low-quality, low-entry steel used to make low-quality knives.

AUS 6 is also stainless steel as it contains 14% Chromium. This is more than what is required to make stainless steel. Although AUS 6 knives are low-end, they don’t rust easily.

AUS 6 stainless is the Japanese equivalent to AISI 440A and DSR-1K6 steel. AUS 6A stainless is another name for it. It was used in CRKT knives and Kershaw knives. However, it was eventually replaced by cheaper and superior Chinese steel such as 4Cr14 steel and 8Cr13MoV steel.

Rockwell hardness for AUS 6 is 55-58HRC. The heat treatment that was used to make AUS 6 hardens will affect the hardness. It is a soft steel, which means it can be easily sharpened and machined. Low hardness is due to the 0.65% carbon in its composition.

Knives made of this steel are strong enough to withstand tough applications. However, they should be kept out of direct contact with any sharp objects or other metals that could cause damage. You can use AUS 6 in small blades that are not subject to excessive wear.

The AUS 6 steel has decent edge retention considering its hardness and carbon content. AUS 6 knives have a longer edge retention than other steels but are not the best.

You should consider knives made of steel with more carbon than AUS6 stainless steel if you want a knife that will last a long time. AUS 10 steel, which is an improved version of AUS 6, will keep the edge sharper for longer.

Although it is not the toughest steel, its hardness makes it able to withstand impact and pressure without cracking or chipping. It is not very hard steel, so it has decent strength. Manganese and Nickel are also added to their toughness.

AUS6A steel can be heat treated to increase its toughness for outdoor knives. However, AUS6 blade steel will outperform most high-carbon knife steels in toughness.

This is where AUS 6A excels. It has enough chromium 14.50% in it to make it stainless steel and can resist corrosion. The AUS 6 stainless-steel knives are resistant to rust and staining but need to be maintained with proper care.

This steel is suitable for outdoor and wet use. It is important to clean and dry the blades after each use.

AUS 6 steel vs. all other steel

AUS 6 has less carbon and lower hardness. It is also more durable and easier to sharpen. You will get the same performance from either of these steels; there will be no difference. 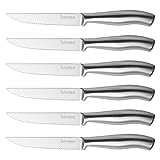 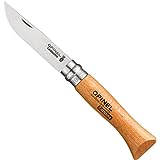 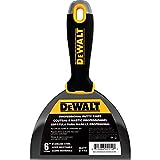 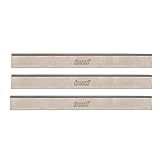 CPM S30V is a premium steel that is produced by Crucible Industries. It outshines AUS6 stainless steel in hardness and corrosion resistance as well as wear resistance. The crucible CPM process results in S30V stainless steel having a finer grain structure and a higher proportion of carbides.

S30V knives have better edge retention and wear resistance. Sharpening them can be more difficult. It will be easier for an AUS 6 steel knife to be sharpened than an S30V knife. AUS6 steel will give you a greater level of toughness, while S30V is better in many aspects.

AUS 6 steel has a greater amount of carbon than 420. This translates into better hardness and wears resistance. The edge retention of AUS6A steel is significantly better than that of 420 steel due to its increased hardness. AUS6 stainless steel has a higher carbon content and also includes additional Chromium to increase its resistance to corrosion.

AUS 6A stainless is equivalent to 440A, a more advanced version of 420 steel. This stainless steel is superior to 420 in almost all aspects, except for the ease of sharpening. They are almost identical in toughness, and neither will chip or crack.

A high proportion of carbon and other alloying elements, such as vanadium, contribute to the hardness. AUS 6A stainless is moderately resistant to corrosion, but it cannot be compared with VG10 stainless steel.

VG10 has a higher level of corrosion than premium S90V or S35VN. It contains a large amount of Chromium, additional Cobalt and other elements that greatly increase its resistance to corrosion.

AUS 6 and AUS 8 both belong to the Japanese AUS stainless-steel family. AUS 8 stainless is a more refined version of AUS 6. It has a more balanced composition. It has more carbon elements. These carbon elements are added to form hard carbides, which increase its hardness and improve edge retention.

Despite having the same amount of Chromium as AUS 6, AUS 8 stainless-steel knife has a higher corrosion resistance than AUS 6. This is due to the inclusion of molybdenum. The AUS 8 stainless steel blade is also toughened due to its improved alloy composition.

Although sharpening AUS6 steel is more accessible than AUS8, the difference in skill is negligible. AUS 8 stainless is a better choice.

AUS10 stainless steel is an upgraded version of AUS8 stainless steel. It is the top-rated Japanese AUS series. AUS 10 steel has more carbon elements than its siblings, and it also contains additional vanadium. These extra elements enable AUS 10 steel to achieve a high hardness level, up to 60 HRC.

AUS 10 steel has a higher level of vanadium carbides than AUS 6. This makes it more wear-resistant and edges retention. AUS 10 steel also has additional Nickel, which increases its corrosion resistance even at high temperatures.

AUS 6 steel is less hard than AUS 10 steel. However, AUS 10 steel has a higher Rockwell hardness and offers more toughness. The AUS 6 Knife is less susceptible to cracking and chipping. It will be easier to sharpen AUS6 steel than AUS10 steel.

AUS 6 is a low-budget steel that can be used to make knives. It is not comparable to high-end or mid-range steel. It can still retain an edge, has good wear resistance, and excellent toughness. It can also resist corrosion. You can also check out the AUS 6 knife options if you’re looking for a budget knife.

Most AUS 6 stainless steel knives have been mass-produced and are die-cut from blanks rather than forged. They are, therefore, affordable and easy to access.