What is Nitro V Steel?

The Nitro-V steel is a martensitic stainless metal with high chromium content and nitrogen in its alloy. New Jersey Steel Baron introduced Nitro V, a relatively recent stainless steel, to the market in 2017. It is an enhanced version of AEB–L. This steel has excellent corrosion resistance and high hardness.

Nitro-V is the best steel to use for thin blades such as those used in razor blades and knives. Because the edges are razor-sharp for a long time and it is resistant to rusting, it makes the best diving knives.

Users and knifemakers swear by NitroV stainless steel knives. They are faster to achieve a razor-sharp edge and last longer. 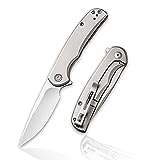 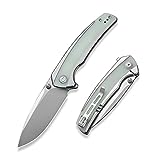 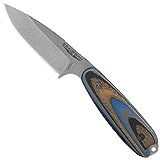 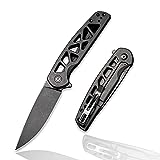 The table below shows the chemical composition for Nitro V stainless steel.

Nitro-V’s hardness is between 58 and 62 HRC. Because the heat treatment the manufacturer applies will affect the final product’s hardness, there is a wide range in its hardness. This steel is very hard and can be easily cut into thin blades. It’s great for making slicing knife blades.

The toughness of Nitro-V steel

The Nitro-V stainless steel is tougher than other steels of the same type. This is contrary to many people’s expectations as hard steels are generally weak. It is superior to most premium steels, such as M390 and CPM154.

It is a popular choice because of its balance between toughness and hardness. Look into Nitro-V steel knives if you’re looking for knives that are tough and can withstand harsh applications.

However, this does not mean that NitroV steel has poor edge retention. You will not be disappointed with its durability. Its edge retention is comparable to 52100 Steel. However, it is lower than steels like 440C or Crucible powder steels.

Nitro V stainless steel is a martensitic steel that has high chromium content and nitrogen. It offers exceptional corrosion resistance. Nitro-V blades are resistant to rusting in salty waters, making them ideal for diving knives.

While Nitro-V stainless steel is resistant to rust, it is recommended to wash and dry knives after each use and before storage in order to prevent rust from forming.

The improved alloy makes Nitro-V steel a decent wear-resistant material. Although this steel isn’t the most wear-resistant, it will still be able to withstand tough applications.

You should not use a knife made of very thin NitroV stainless steel blades. This will make it vulnerable to damage. It will last a long time if you only use it as a slicing tool.

It would be expected that Nitro-V steel would be difficult to sharpen due to its hardness. However, this is not true. This steel is a good choice for sharpening because it doesn’t take a lot of effort or time to achieve a razor-sharp edge.

AEB-L steel can be considered Nitro V steel. Nitro Steel has, however, added Nitrogen and Vanadium to increase corrosion resistance. These elements allow Nitro V to achieve a sharper edge faster, but it does not last as long as the Vanadium added to it is not sufficient to form hard carbides that will improve edge retention.

Overall, S35VN steel is better steel than Nitro-V steel. Although Nitro-V steel is stronger than S35VN, S35VN doesn’t hold an Edge as well as S35VN steel despite their almost identical hardness of 61HRC. Due to higher levels of vanadium and nitrogen in S35VN, which aid in the formation of hard carbides, S35VN is more wear-resistant than Nitro-V.

Although S35VN can hold an edge for longer, advanced sharpening Nitro V Steel can make it sharper. However, it won’t last long and will need to be sharpened frequently. It is razor-sharp at its thinnest, which is why it is used to make razor blades.

They are almost identical in terms of corrosion resistance. However, S35VN is slightly better than Nitro V because it has a more refined alloy.

Nitro V steel is stainless steel with 13% of chromium, while D2 steel is semi-stainless with 11.5%. Therefore, Nitro V blade steel is more resistant to corrosion than the D2 blade.

High-impact applications are likely to be able to withstand Nitro V stainless steel without cracking or chipping, while D2 is more vulnerable to cracking and chipping in tough applications.

S30V, just like S35VN forms hard carbides, which give it an all-around excellent performance in terms of edge retention and toughness. S30V is more sharp than S30V, and S30V may be sharper if it’s sharpened to perfection. S30V is slightly better than Nitro V in terms of corrosion resistance.

S30V is a tougher steel than Nitro V, as well as most premium and mid-range steels like S90V. A few steels can improve Nitro V’s toughness, such as LC200N and AEB-L.

The stainless steel Nitro-V has a high corrosion resistance because of the addition nitrogen. However, 3V is not stainless and can rust in corrosive environments. The edge retention and wear resistance of Nitro-V are outstanding. With Nitro V, it is easier to achieve a razor-sharp edge. 3V is tougher.

M390 is premium stainless steel. Nitro-V is high-end. It is obvious that M390 stainless steel is superior to Nitro-V. M390 has excellent edge retention, which is among the best on the market. It also offers outstanding wear resistance and greater corrosion resistance than Nitro-V stainless steel with around 20% of chromium. Nitro V is however more tough and easier to sharpen than M390.

M390 is a rare material and can be found in high-end knives. It is ideal for knives that don’t need frequent sharpening or knives that will be exposed to corrosive environments.

Because it has great sharpness and corrosion resistance, toughness, and hardness, and is easy to sharpen, Nitro-V steel makes a good knife steel. This steel is great for knife makers as well as users who have limited budgets and want an alternative to Bohler and crucible steels. The Nitro V blades are extremely sharp on thin blades and have a higher hardness. A 14C28N or AEB-L equivalent is available.

Are you looking for an everyday pocket knife that will work well? The CIVIVI Perf frame lock pocket knife is a great choice. It’s made with a NitroV steel blade and is extremely resistant to corrosion. Its razor-sharp cutting ability will quickly make it possible to do any type of job.

The pocket knife’s lightweight and long-lasting design is due to its skeletonized handle. It can be carried discreetly thanks to its reversible clip, which makes it ideal for outdoor hunting, hiking camping, bush crafting, and other outdoor activities.